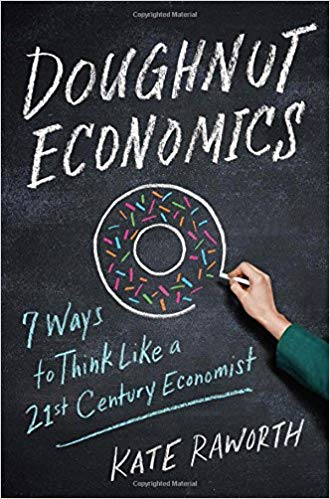 When reviewing this book by Kate Raworth, the journalist George Monbiot summed it up by saying “Instead of growth at all costs, a new economic model allows us to thrive while saving the planet”. Let’s explore.

Introduction: Who Wants to Be an Economist?

Kate Raworth makes the case for a new intelligence of economics by first explaining why we should be concerned. This relates not only to the present state of the world—however appalling the diagnostic might be—but, as importantly, to the transition to a valid economic framework and the new narrative that needs to replace conventional economics.

Today, the richest 1% of people on the planet own more wealth than the other 99% put together. According to Oxfam, the world’s 26 richest people own as much as poorest 50%.1 This is the symptom of a system using financial wealth as its sole metric of success, be it for individuals, countries, or corporations. With such a narrow logic and in the absence of proper regulations, money interests will always be prioritized over the genuine added value of everybody else’s hard work. The financialization of the economy is a permanent risk at the core of the system, as illustrated by the depressions of 1929 and 2008, as well as by the stunning income inequality in almost every country of the world.

At a deeper level, the reference to money as the primary metric of economic development implicitly means that progress can be equated to more of everything ad infinitum. This reduction of the economy to what makes money could not end up, in the course of recent history, as anything else than an invitation to pillage and harm the finite planet we depend upon. As a consequence, the world we live in is now in a state of environmental collapse. Bio-diversity is disappearing at an alarming rate, climate change is likely to turn soon in a runaway global warming process, and soil and water have been degraded almost everywhere due to intensive agricultural practices and unfettered industrial pollution.

The point is not to deny the advantages of a healthy economy but, against the self-contradicting assumption of infinite growth, to make it effectively such. Health and growth are not necessarily the same thing. Ignoring the difference, conventional economics does not answer the challenges mentioned above. It created them. The solution? “What if we started economics not with its long-established theories but with humanity’s long-term goals, and then sought out the economic thinking that would enable us to achieve them?” (Id. pp. 8-9). This is what this book is set to be doing.

What you see here is the “doughnut”. By recognizing the boundaries within which the economy has to operate, this model also puts it back into the system of systems that the world really is. Far from being a constraint to human development, it promotes an integrated approach to the economy that can only provide the best social, environmental, and economic output. When reviewing Kate Raworth’s book, the journalist George Monbiot adequately summed up this Copernican revolution by saying “Instead of growth at all costs, a new economic model allows us to thrive while saving the planet”.2 Let’s thrive!

In order to know how “to thrive while saving the planet” and to free the economy of its conventional abstract path, Kate Raworth explores seven mind-shifting ways of thinking like a twenty-first-century economist:

Click it!
Toolbox
And now?
Scroll back to top